Email ThisBlogThis!Share to TwitterShare to FacebookShare to Pinterest
Labels: AV

TM’s new 100Mbps is now official. It is RM129/month for 100Mbps download and 50Mbps upload with unlimited quota. The plan also comes with 600 minutes of talk time to mobile and fixed line numbers, and TM is also bundling a DECT phone while stocks last. On top of that you also get to pick a unifi TV pack (Varnam+, Aneka+, Ruby+) but you have to watch it via the unifi PlayTV app as the set top box isn’t included. Email ThisBlogThis!Share to TwitterShare to FacebookShare to Pinterest
Labels: Unifi 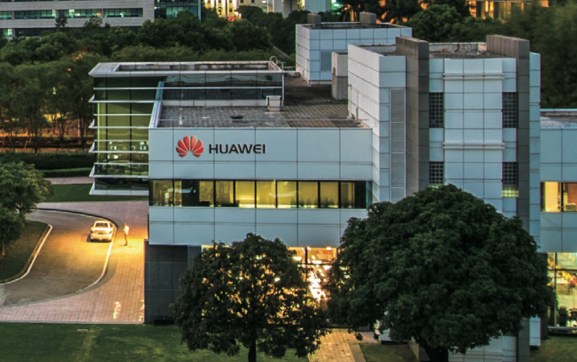 Above: Huawei campus in Shenzhen, Guangdong, China.
Image Credit: Huawei
For the first time in seven years, Samsung and Apple have not taken the top two positions in the worldwide smartphone market. All hail Huawei. Although Samsung held onto first place — the South Korean giant typically dominates the first three quarters of the year, with the U.S. company winning the fourth quarter — Huawei passed Apple for second place this past quarter.
Smartphone vendors shipped a total of 348.2 million smartphones worldwide in Q2 2018, down 1.8 percent from the 348.2 million units in Q2 2017. Of the top five (Samsung, Huawei, Apple, Xiaomi, and Oppo), only Samsung shipped fewer units than the year before. The Q2 2018 figures come from IDC (though Canalys and Strategy Analytics both agree that Huawei passed Apple in the quarter), which summarized its findings in the following chart: 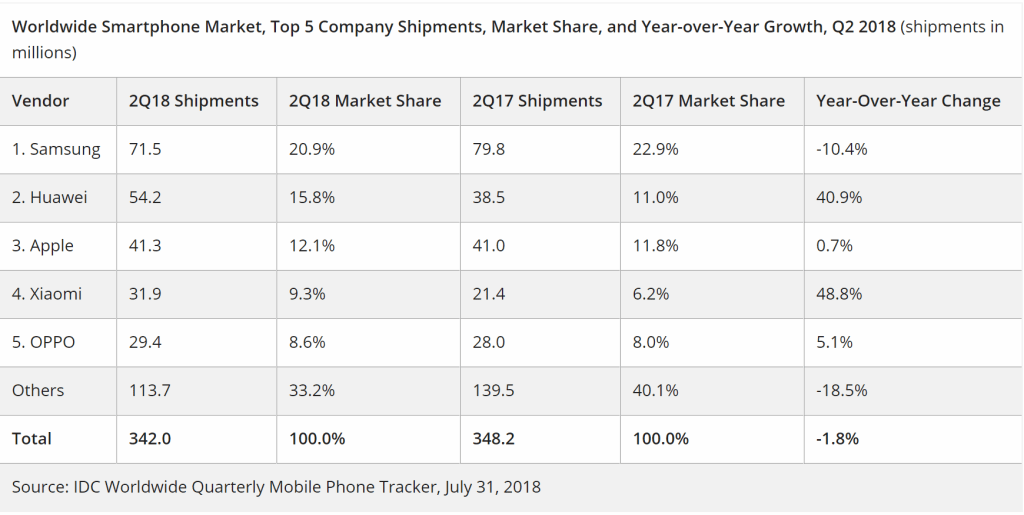 As you can see above, Samsung lost 2.0 percentage points (from 22.9 percent to 20.9 percent) as it shipped 8.3 million fewer smartphones (71.5 million). Samsung typically owns about a fifth of the market, and that remains unchanged. The Galaxy S9 and Galaxy S9+ simply did not deliver. Samsung blamed the slowdown on intensified competition at the high end and an overall sluggish smartphone market. All eyes are now on the Galaxy Note9, to be announced on August 9.
Huawei gained a whopping 4.8 points, hitting a new high of 15.8 percent market share. Passing Apple required quite the jump. Huawei is still closer to Apple than it is to Samsung, but if it can keep the momentum going, the Chinese company will have successfully dismantled the duopoly held by its two biggest competitors. Huawei’s P20/P20 Pro series found strong demand, as did Honor models sold via online channels.
Apple’s share, meanwhile, grew 0.3 points (from 11.8 percent to 12.1 percent), thanks to slight iPhone gains. The iPhone 8, iPhone 8 Plus, and iPhone X are chugging along, as well, with Apple specifically noting that the iPhone X was the top seller. The expected launch of three next-generation iPhone models this fall could help the company reclaim second place.
Xiaomi jumped 2.9 points (to 9.3 percent) and Oppo gained 0.6 points (to 8.6 percent). Huawei has a bigger lead over Apple than Apple has over Xiaomi, which was unfathomable just a few quarters ago.
Companies outside of the top five together lost 6.9 points. The top five leaders are increasingly dominating, and it wouldn’t surprise me if they all soon held double-digit shares of the pie. Consumers no longer seem to be as obsessed with upgrading to the latest and greatest, but when they do, they’re increasingly considering the Chinese trio instead of the de facto Samsung or Apple options.
“Globally, as well as in China, a key bellwether, smartphone consumers are trading up to more premium devices, but there are no longer as many new smartphone converts, resulting in shipments dropping,” IDC associate research director Melissa Chau said in a statement. “When we look at it from a dollar value perspective, the smartphone market is still climbing and will continue to grow over the years to come as consumers are increasingly reliant on these devices for the bulk of their computing needs.”
“The continued growth of Huawei is impressive, to say the least, as is its ability to move into markets where, until recently, the brand was largely unknown,” IDC program vice president Ryan Reith said in a statement. “It is worth noting that Apple moved into the top position each of the last two holiday quarters following its product refresh, so it’s likely we’ll see continued movement among the top-ranked companies in 2018 and beyond. For most markets, the ultra-high end ($700+) competition is largely some combination of Apple, Samsung, and Huawei, depending on the geography, and this is unlikely to change much in the short term. At the same time, Xiaomi, OPPO, and vivo are all slowly pushing their customer base upstream at a price tier slightly lower than the top three. This is an area they should all watch closely, as the builds in this segment are getting increasingly more advanced.”
1 comment: In conjunction with this year’s national day, Huawei has announced a reduction of price on their flagship P-series. You can now get your hands on the sleek Huawei P20 and P20 Pro at a more affordable price.
Starting today, you can now enjoy a RM400 price reduction on P20 Pro and RM300 off the P20. In other words, you can purchase a brand new P20 Pro at the price of RM2,899 (originally priced at RM3,299) and a brand new P20 at RM2,299 (originally priced at RM2,599).
To recap, the Huawei P20 Pro features a LEICA Triple-Camera setup with a 40MP /f1.8 main shooter, a 20MP f/1.6 monochrome camera and a 8MP f/2.4 telephoto camera with 3X optical zoom and OIS. Besides that, it has a 6.1-inch Full HD+ display and it runs on Kirin 970 processor with 6GB of RAM and has 128GB of non-expandable storage.
On the other hand, The Huawei P20  comes with a 12MP f/1.8 + 20MP f/1.6 dual-camera combo and a front facing 24MP f/2.0 selfie shooter. It also has 5.8-inch Full HD+ display, a Kirin 970 processor, 4GB of RAM and  128GB of internal storage.
In addition to the news of the price reduction, Huawei will be organizing a special National Day contest through the NEXT IMAGE Awards 2018. All you have to is to submit your photo entries capturing the beauty of Malaysia by using a Huawei smartphone. The last day to submit your entry is on the 31st of August 2018. Grand prize winner will stand a chance to walk away with USD20,000 (around RM81,454) and the once-in-a-lifetime opportunity to showcase their work to a global audience. Other prizes such as Huawei P20 Pro, Huawei P20 and Huawei Matebook X Pro are up for grabs.
Participants are required to submit their photos based on the 6 categories given:

1) Good Night
Capturing fun moments in low light
2) Hello, Life!
Sharing the emotion or the inspiration in everyday experiences.
3) Faces
Experimenting with identity and the power of portraiture.
4) Check-In
Discovering new places and new experiences there.
5) Timeline
Filming stories in less than 30 seconds.
6) Storyboard
Telling a story in 9 frames – a grid of photos that develop a meaningful or intriguing narrative.

For more information on the NEXT-IMAGE Awards 2018 click here. To learn more about the Huawei P series, you can visit their page here.
No comments:

Email ThisBlogThis!Share to TwitterShare to FacebookShare to Pinterest
Labels: Huawei

The anticipated Nokia smartphones are finally coming to Malaysia. HMD Global, the company behind the revival has sent out invites for a Malaysian launch that’s happening in less than two weeks from now.
They will be introducing 3 smartphones in Malaysia – Nokia 3, Nokia 5 and Nokia 6, that were announced earlier this year.

The Nokia 6 is currently their top of the line offering with a 5.5″ Full HD display and a pair of speakers enhanced with Dolby Atmos. It gets a 2.5D glass on top while the body is crafted from a single block of 6,000 series aluminium.
It runs on a Snapdragon 430 processor with 3GB RAM and 32GB of storage. There’s also a special Nokia 6 R edition that comes with 4GB RAM and 64GB storage along with a glossy black colour. In terms of optics, it gets a 16MP main camera and an 8MP selfie shooter with Auto Focus. It is powered by a 3,000mAh battery and it runs on Android 7.1 Nougat out of the box.

The Nokia 5 gets a 13MP main camera and a front-facing 8MP selfie shooter. The battery capacity remains unchanged with a 3,000mAh unit and it also runs on Android 7.0 Nougat.

For the entry level segment, the Nokia 3 comes with a modest 5″ HD 720p display and under the hood it runs on a MediaTek 6737 processor. It comes with 2GB of RAM and 16GB of storage while the cameras are bumped down to an 8MP main camera and an 8MP front shooter. The battery is a notch down too with a 2,650mAh capacity.
According to earlier speculation, the Nokia 6 could be priced at RM899 while the higher-spec Nokia 6R is priced at RM1,299. There’s no mention of the Nokia 3310 in the official invite but there’s a chance that this throwback device could be making an appearance.
No comments: